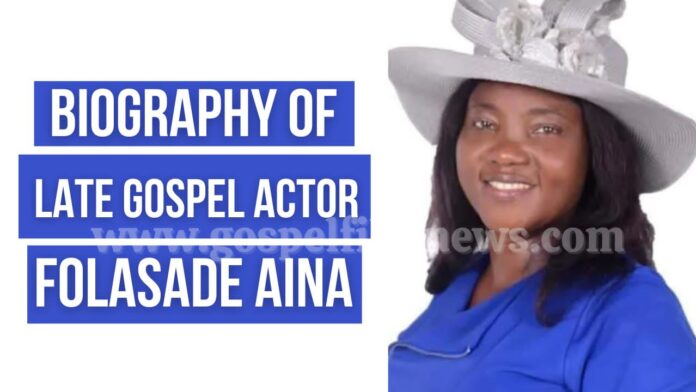 Folasade was born on the 9th of August 1967 at Ijebu Ode to Chief Adekoya Olunuga. Her mother, Chief (Mrs) Ebunola Olunuga, fondly named her Modupe because of her graceful birth. She composed a special song that she regularly rendered in thanksgiving, Gospel Film News learnt.

“Sade fine fine”, as she used to call herself in early childhood, started her formal education at St David’s School, Kudeti, Ibadan, in 1973. She attended Adeola Odutola College, Ijebu Ode from 1979 to 1985.

Sade studied Mass Communications at the Ogun State Polytechnic, Abeokuta (now Moshood Abiola Polytechnic). She obtained her postgraduate diploma from the Lagos State University. She was an all-round student who excelled in both academic and social activities.

According to information available to Gospel Film News, she had her National Youth Service at the N.N.P.C. in Lagos from 1996 to 1997. She thereafter had a stint in business at the Flour Mills of Nigeria PLC, Apapa.

Mrs Folasade Aina joined the services of the Lagos State Judiciary in 2009 and was there until her demise.

Sister Sade, as called by her friends, first met the love of her life while at Adeola Odutola College, Ijebu Ode. However, her relationship with Bro. Olugbenga Aina, a man she fondly referred to as “a man of peace”, started when they met again at the Christian Fellowship of the Ogun State Polytechnic, Abeokuta. The two lovers got married on the 1st of June, 1996, at St. David’s Church, Kudeti, Ibadan. The union is blessed with three sons and a daughter.

Pastor & Mrs Aina were members of the Redeemed Christian Church of God until the husband received the Lord’s Call and became the set man over The Reconciliation and Restoration Chapel with the wife beside him.

Pastor (Mrs) Aina found her passion in the drama ministry. She attended the Mount Zion Institute of Christian Drama in 2005. She has performed in several evangelical movies and stage dramas.

Sade was an active member of the All Nigeria Conference of Evangelical Drama Ministers (ANCEDRAM) and one of the elders of the Lagos State Chapter. She started “AKİYÈSÍ”, a transformational piece on Facebook that has blessed many, far and wide. Testimonies abound on repairs to broken lives and homes. The series has led many to Christ, Gospel Film News can confidently confirm.

Folasade was a role model to many who crossed her path. She was simple and forthright. She loved God! She transited to glory on Wednesday, 19th October 2022.

May her gentle soul Rest In Peace. Amen!

ANCEDRAM fasts, prays every first Monday of the month

Liers lying in the waiting by Mike Bamiloye