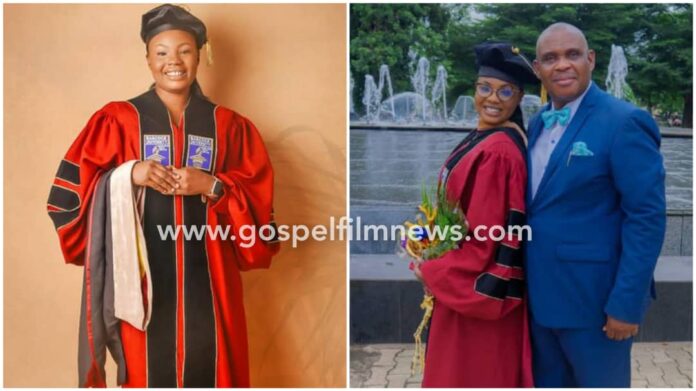 Life they say doesn’t give you what you desire but what you demand. This best explained the academic journey of Priscilla Asikhia, a 25 years old PhD Graduate who’s the first daughter of filmmakers, Professors Lekan and Busayo Asikhia. In this exclusive interview with Gospel Film News, Priscilla who’s also a female actor revealed how her principal in secondary school used to call her No Future Ambition. She also disclosed some of the Challenges she faced, how she overcame and also advised filmmakers academically. Priscilla further told Gospel Film News the role her parents played in achieving this great feat. Excerpt:

Could you please lead us into your background?

My name is Priscilla Asikhia, I hail from Edo state, Nigeria. I am from a God fearing family, My parent are serving God in the area of Christian film production. I was trained and brought in the way of the Lord. My parents are also lecturers and researchers. I grew up with parents who knew the importance of prayers, practicing the word of God and actively involved with ministry (movie productions and preaching). I picked interest in script writing and eventually enrolled in the script writing dept. of Disciple’s Film And Media Institute coordinated by my parents. I also love acting. Growing up for me was quite difficult because I was not a bit below average in my academic performance. In fact I remember a point in my life when I had to repeat Juniour Secondary School 2 because of my performance in school. My principal of that particular school called me “NFA” (No future Ambition) because of my grade in mathematics. But my parents didn’t give up on me, God didn’t give up on me. I changed my school severally because of my performance and my parent were the instrument God used for me.

Your academic career seems very fast at this tender age of yours, what’s the secret?

I do not have any secret. GOD and DISCIPLESHIP is my secret. My first born again experience was in May, 2012. I was writing my SSCE. I had an encounter with God and I couldn’t sleep throughout the night. I kept crying and weeping because of this deep encounter. That same year I got admission in Babcock University for my BSc degree. But I left God due to peer pressure. But this God didn’t give up on me. June, 2016 I had another definite encounter. It was like the experience Jacob had when he wrestled with the angel that came to visit him and his life never remained the same. That angel left a mark in his life. That is exactly how I can describe my encounter too. God left me with a mark and I couldn’t go back to my old lifestyle. And so ever since then I promised him that I was going to do anything whatsoever he wants me to do if only he wouldn’t make me a mediocre. God also used and is still using discipleship to groom me. After my second encounter, God used my spiritual parents Pastor Lanre Adeboye and his wife Yinka Adeboye to groom me. My NYSC period was another point God used for me. I served in Peace House, Gboko Benue State. And that one year was a query site of grooming and making of who I am today. Therefore I am who I am today by the mercy of God. I only received mercy and found favor from God. Obedience to God, My parents and also my spiritual parents.

Being the youngest graduating PhD student in Babcock University during the last convocation, how do you feel?

I feel fulfilled, my life brought praise and glory to the name of the Lord.

What are the challenges you encountered in the process of attaining this height and how did you overcome?

There is nothing successful that comes without challenges. One of the challenges I had was balancing my career, ministry and schooling. Trust me It was not easy. I remember days I would have to go to school very early on Sunday morning because of lectures and coming back to Lagos from Ilishan Ogun State by 10pm in the night and I would have to leave for work 6:30 am the next morning. Days I would lock myself up in the store room of my place of work during my break time all because I was reading for my examination. But one of the things that strengthened me was that I cried for the grace of God. In the aspect of the ministry, there were some group of people God gave me to groom for him. And that the Ministers seed and Single sisters. I remember there were days I would have to prepare for bible study because we have a WhatsApp group where we do our meetings coupled with my busy work schedules but God helped me through it all. There is a scripture that kept me going, Philippians 4:13 “I can do all things through Christ who strengthens me”. My parents too encouraged me and they never stopped praying for me. And the word of God was my encouragement.

What role did your parents play in your academic career?

If I was born into another family I don’t think this would have happened. I must confess my Parents played a major role. I remember the time I was supposed to repeat JSS2, my mom didn’t believe I was a dullard. She did not give up on me. She kept encouraging me and after school she would sit down with me to teach and assist me in my school subject despite her busy schedules. I also remember 2010, I was in SS2 my dad called me and sat me down and he told me that he had a revelation about me, that he saw that I became a PhD holder at the age of 25 years. I not only didn’t laugh at his words but I didn’t believe him because I felt I was not even going to pass my SSCE examination at one sitting but God helped me I passed all my SSCE examination at just one sitting. So my parents played a major role in my life. I am who I am first of all by the grace of God and by the help of my parents.

You now have a doctoral degree, what should people expect from you next?

I want to affect my younger generation, especially the minister’s seeds and single sisters, It gladdens my heart to see these set of people to be spiritually matured and rooted in faith.
Well, I am aspiring to be the youngest Professor of my time. I also want to change a lot in Nigeria as regards the educational system and as well as adding value to the nation at large.

You are at the peak of your academic career, when are you planning to settle down maritally?

What’s your piece of advice to gospel filmmakers, drama ministers who believes that academic qualifications is not really needed to make be a successful filmmaker?

Of course being educated is good and it may have an additional advantage but there is nowhere in the bible that says a minister of God will not succeed if he/she is not educated. The major yardstick of Jesus’ ministerial success was the Spirit of God that came upon Him because He pleased the Lord. Heaven opened unto Him because He obeyed and pleased the Lord. The major problem most so called believers have is inability to hear God and know His plan for them. So, if God wants a man to further his education and he compares himself with other Ministers, he is not wise.(2 Cor. 10:12). Don’t think logically because God alone knows the thoughts and plans he has for a man. He knows the route to which you would be successful. He knows that pattern you should follow to make you for his glory. So just obey God at every direction he leads you.