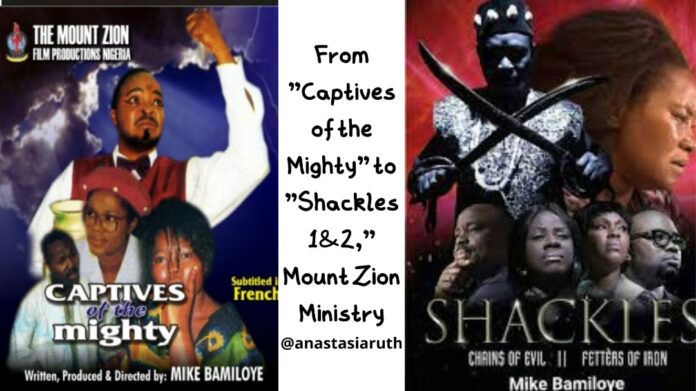 Evangelist Mike Bamiloye, the founder of The Mount Zion Institute and Mount Zion Film Ministry, has not only grown his family generation successfully with the aid of the Holy Spirit by giving birth to children and grandchildren who follow Christ, but he also has a great team behind him who have followed steadfastly, as we can see in his production routes.

An avid viewer of the Mount Zion films can testify of the countless lessons and probable liberation they have enjoyed that no ordinary motion picture could have given them; one which might have been the idea behind why God had to crush, press and create the person of Mike Bamiloye for such a time as this.

With carefully selected themes, being portrayed in their motion pictures one could either casually view the movie or deduce the message it intends to teach and bring to your notice about anyone going through such issues. However, it is certain that no one who is a new or old audience would be left unentertained; although entertainment is not entirely the reason gospel movies are aired and if ever you thought it was, think again.

Rereading a book you’ve already read is recommended since you’ll see it from a fresh perspective and pick up new information. The same is true of watching movies. A second watching of the film “Ultimate Power” can really teach the spectator a lesson about the term “Ultimate Power,” as many people remember the movie by the mention of “IAMATANGER.”

With the movies “Captives of the Mighty” and “Shackles” both of which were shot/viewed decades away and may or may not have been consciously written with the same theme “SPIRIT SPOUSE” devoted viewers who have seen the movies decades apart may not even have recognized the similar themes but they would testify that both pictures uncovers a realm and issue that affects many (believers and unbelievers) till this day.

In contrast to the woman in “Captives of the Mighty” who had a spiritual spouse and four children, the woman in “Shackles” couldn’t wait to start a family and forced the spirit spouse to make her physically pregnant. We saw in the first film that the woman was aware of her spirit spouse even before her wedding, and this was the similar concept in Shackles 2. In contrast to Shackles 2, though where we are informed that a night party was the origin of the spirit spouse but we don’t see anything in Captives of the Mighty. But for some reason, these victims have chosen to keep their spiritual struggles hidden from their physical partners until a string of dramatic events take place that cause the secret to be revealed to their physical partner.

Both movies, which are decades apart, make a point about a problem that not only affects married couples but also single people. They all show the same characteristics of women who hide information from their physical partners out of fear of being rejected by them if the truth comes out. This causes them to look for solutions that, regrettably to them, must involve their physical partners.

However, is it possible that this recurring theme is pervasive in society and that it may be pointing out and related to issues that many people have kept hidden in society? Could this also imply that guys do not have this problem? Or such hasn’t been looked into? Why are only female characters implied to experience this?

The question of spirit spouses, which some people have erroneously and willfully questioned, appears to arise not only on prayer altars from legitimate churches but also in films like these, which highlight a topic that many are reluctant to discuss for fear of bringing up too many other issues to mention.

If this were a problem, would a wedding be canceled? Or would it open the system to a novel strategy to address this persistent issue? that although it is a common problem in a family and society where many may confess that what seem rampant only seems forbidden to be talked about.

People who have used sex, particularly before marriage, as a means of selecting good suitors have conciously and unconciously invited this spirit to dominate its victim and may benefit from watching these movies. Because of the things their spirit spouse has done to them, both knowingly and unknowingly, have made many people today who should be married disregard marriage and agree to things they wouldn’t ordinarily agree to. Many people who want to get married attend fasts and prayer retreats but fail to address the pressing problem, at which point they claim that God is slow to respond. Others completely dismiss the matter, and this all supports the proverb “My people perish for want of information” Hosea 4:16 because “The truth you know will set you free” John 8:32

Taking the gospel to the world is expensive as it is but it is not only with the pastor on a pulpit that we can get an expose’ about these things. Some will tell of the devices of darkness in articles, in testimonies or even in movies such as these but no matter the means; when the Holy Spirit is the brain behind the revelation, the message is one, that indeed such things as these exist and by God, there is a way out.

You can not only grasp the plight of the victims and the procedures under which such scams are designed by seeing films like this, but you can also learn how to escape them. Loyal viewers should imitate the pleading strategies of the victims to the almighty who is our ultimate redeemer, similar to how minister Femi Adebile approached his film “The Keeper.”

Evangelist Mike Bamiloye, has succeeded not only in exposing issues as these through one motion picture but also in his new series movie formats as seen in “Abejoye” which comes in series. God bless the team.

Drama Ministers Fasting and Prayer Day 36: NO SENTIMENT. NO COMPROMISE

Why you should join, remain in ANCEDRAM