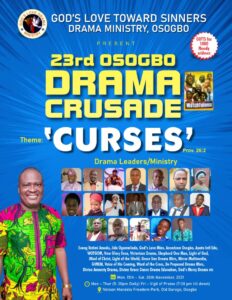 The host, Evangelist Abraham K. David in a Release made it known to Gospel Film News that the theme of the programme is “CURSES” and will start from Monday 15th to Saturday 20th November 2021 by 5:30pm daily, while there will be Vigil of Praise on Friday 19th November by 7:30pm.

“I know Where God Put His Eye When Pastor Adeboye’s Son...