The Leadership of The Pentecostal Fellowship of Nigeria, PFN through her National President, Bishop Francis Wale Oke recently approved the creation of the Directorate of Politics and Governance, DPG.

Veteran gospel filmmaker and politician, Evangelist Kolade Segun-Okeowo has been appointed the State Deputy Director for Ogun State chapter of the PFN Directorate of Politics and Governance, DPG.

The DPG is out to encourage and chaperone active Christian participation in Politics.

Kolade Segun-Okeowo who is the convener of ‘Believers in Politics’ was named the Director of Political Education for the PFN OGUN STATE in 2020, and in October 2021 he became the Deputy Director of the Directorate ofPolitics and Governance. 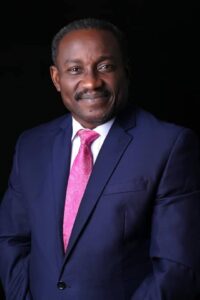 In an exclusive interview session with Gospel Film News, Kolade Segun-Okeowo disclosed that based on his antecedents and deep rooted convictions about the active participation of Christians in Politics, Ogun State Chairman for PFN, Apostle Ahmed Bello OTARU appointed him into the office, stressing that he feels honoured and fulfilled that his passion and continued advocacy for Christian participation in politics is being recognized and higher responsibilities are being committed into his hands.

According to the filmmaker, Politics is not rocket science and not mathematics, the aim of DPG goes beyond presentation of candidates for elective offices but the enthronement of righteousness in political Leadership.

Reacting to a recent statement by a popular cleric that “it will difficult for a Christian to be in politics in Nigeria and remain righteous,” the DPG Ogun State Deputy Director stated that he disagreed with him, saying the best place for light to shine is in the darkness. He reiterated that a Christian who could not survive in the “market place” won’t actually survive on the “altar.”

“In my close to 15 year sojourn in Politics I have met deeply rooted Christians in Politics doing exploits and remaining incorruptible !!! Yet, I have also met some Pastors who are deeply corrupt and completely a disgrace to the Body of Christ. You don’t need to be in Politics to backslide or become unrighteous, even the pulpit is big enough for backsliding,” he said.

“You Are a Great Gift From a Great God to this...