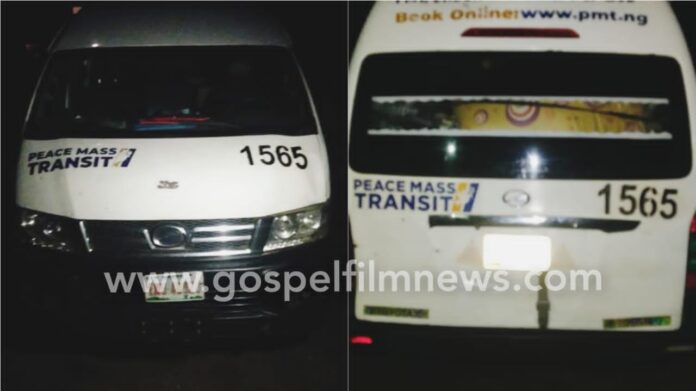 A bus belonging to Peace Mass Transit with number plate ENU 4097J has been reportedly left passengers Stranded at Ore Road from 11am till this dead night.

Report has it that the bus (1565 of Peace Mass Transit Ikorodu park)was to take off from Ikorodu to Portharcourt/Owerri, Onitsha by 6am but didn’t get to leave until to 8am and got to Ore road around 11am, on getting to Ore the driver claimed the vehicle has mechanical fault and according to the driver he has contacted the head office and other managers.

A gospel film maker, Dan Ope Makinde who is also one of the passengers told our correspondent that the company keep posting the passengers that vehicle is coming to rescue them but non has showed up from 11am till night as at the time of filing this report.

The bus with bus number 1565 has about 14 passengers on board. Unfortunately, all effort to speak with the represetatives of Peace Mass Transit proves abortive as at the time of filing this report as their lines were called severally by our correspondent but they wouldn’t pick the call.

Photo News: After The Successful Premiere of Melita, TRECOM Embarks On...

‘Fela’ movie to be distributed free ahead of 2019 election