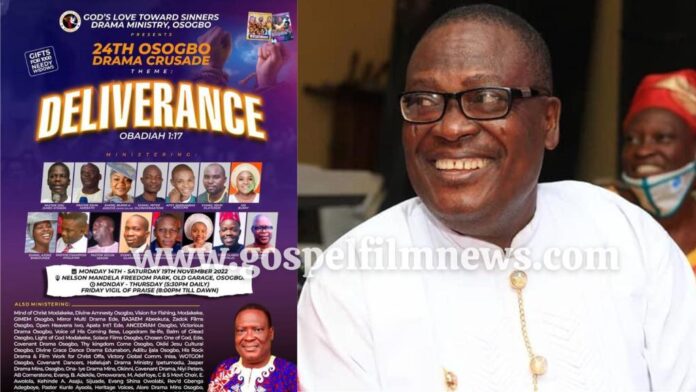 Over 40 ministries and 25 ministers have been penciled down for the 24th Osogbo Drama Crusade, Gospel Film News can confidently report. 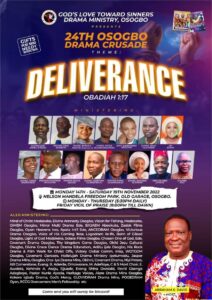 Osogbo Drama Crusade, an annual event that is organized by God’s Love Towards Sinners Drama Ministry, Osogbo is a massive event that pulls thousands of participants yearly from across the Southwest and North Central States of the Country including Kwara and Kogi States are always followed by signs and wonders.

In a statement released by the host, Evangelist Abraham K. David and obtained by Gospel Film News, he revealed that the theme for this year’s crusade is “Deliverance” which was taken from the book of Obadiah 1:17 and will start from Monday 14th to Saturday 19th November 2022 by 5:30pm daily. Vigil of Praise will hold on Friday 18th November by 8:00pm till dawn.

According to the statement, The venue for the Drama crusade is Nelson Mandela Freedom park, Old Garage Osogbo, Osun State Nigeria.

Lagos, Ibadan To Play Host To Premiere of ‘MELITA’ This Weekend