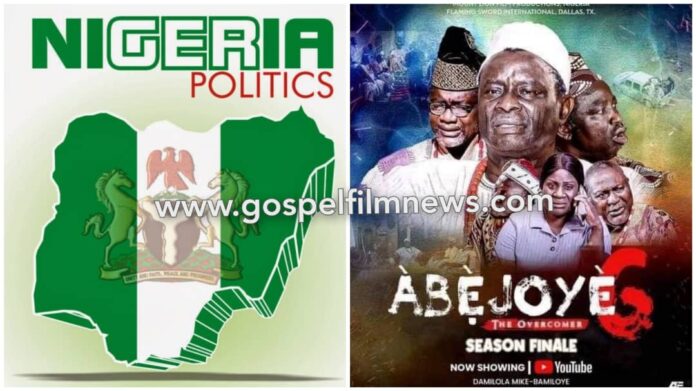 Underneath the songs and glorious wins of Abejoye that the audience has enjoyed lay a secret that the Nigeria’s political system can begin to thrive on as Nigerians prepare for the 2023 election. The undefeated Abejoye who starts out as a king maker and remains a king maker seven years apart; in and out of his country replicates the Nigerian system in ways we should see and learn from as despite the marital and spiritual battles portrayed in the film. Abejoye is in fact a political movie.

Politics is all about power. It is for the candidate a stay of power; it is not merely the power for the people and people having the power to implement changes but truly the effect of the candidate in power. We do not merely choose men to rule us but we choose their decisions and gods. A candidate is not just a person with the campaign forte but also a person with determined followership. Gospel Film News.

Abejoye’s first screening began in 2018; it showcased not only the acceptance of in-laws in to the unwelcome home but also the contest for power between men who sought to degrade one another at the detriment of even their immediate family members who  might lose their lives.  Abejoye as a grandfather had his son’ household plagued by evil men from Ajibogun because of the fight for power on who will hold the rites for becoming the chief king maker. Innocent but afflicted was everyone who had a link to Abejoye and his power chasers.

Though it might seem that his son’ double-dealing as a married man with Didun and Abejoye’s repentance before his return to Ajibogun was the merriment of the audience but in fact; the political rivalry of Abejoye that brought the Elders into his son’ house and the continuous turmoil at Ajibogun by men who tasted the power of God was actually all a political story of let the best man win. If you ever know anyone who seeks to stay in power till death or seeks to gain power even if it meant visiting and taking on spiritual actions thereby disregarding the selfless point that politics is for the people and not for the candidate then you understand that the play for power in Abejoye could in fact teach us a thing or two. 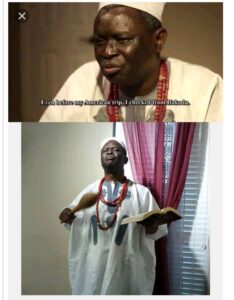 The Elders who had met with Abejoye’s son were forthright enough to admit to the audience that their wealth and sophistication did not prevent them from seeking power or using it in a way that implied they were evil. Gospel Film News. Both the individuals in Ajibogun and the men who were outside of the third-world country were aggressively pursuing power. They behaved like wizards and wore clothing that the average person would not be caught dead wearing unless he or she were wealthy.

Abejoye’ return to Ajibogun raises the bar to more political tumult as the fight for power continues with generational wars. Iya Akesan’ daughter Kinkinyiu who had no business with the political system of Ajibogun makes herself an enemy of Abejoye and also an enemy of the state. She had never been liked by the people of Ajibogun and had stopped the King from cutting down the biggest tree which could bring about development to the town but she had become an enemy to Abejoye not for anything he did to her but because her mother had a war with Abejoye over king making and her mother had lost. Many are known today for taking on battles they know nothing about; they have been known to rant on issues they should run from as it had led others to their death. 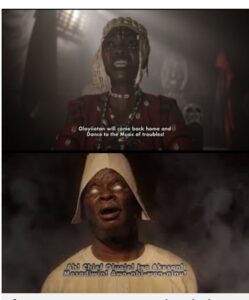 After repenting, Oganwa decided to avoid engaging in power struggles in politics and corrupt generational transactions. This decision preserved his life. After her repentance, Kinkinyu was also kept alive since she refused to carry on with the recommended course of action. Oluoje had learned from the grace extended to him following his humiliation that Abejoye  could not be dethroned as the king-maker using evil means

During political campaigns; candidates are known for their promises and campaign mantras which the general public holds them accountable to during and after elections. They gift out mini treats to entice followers. Because of the current state of affairs and the appealing features of political treats, over the years, populations and even junior political candidates have voted in politicians unbefitting for them and the general public. Gospel Film News. Many can attest today that there are people who act the council of chiefs who wanted Abejoye ousted as the king maker. 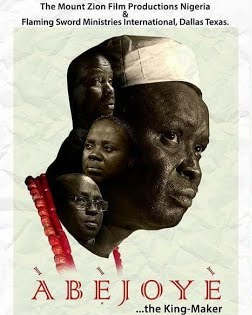 Abejoye had done no evil to the council of chiefs; he had done no evil to the king as well but the council of chiefs had accepted that he be dethroned not for any reason but because he vying for power had bought them with financial treats. Balogun his middle man was also dubious not to release all the funds given to him for electoral purposes. Its like wanting to be president and not doing the dirty job yourself but having men who you boss around to go ahead and take away who isn’t in support of you or to give treats to men who you could buy to become your followers. You are innocent of any direct ill but actually the reason for it.

Abejoye’ life had been in danger throughout the seven years, not solely for his repentance but because he was the king maker and could implement changes for the people. Abejoye’ decision to do things right also became a concern to those who wanted not only to control him but also the people. His greatest offence was his stance to do the right thing. Abejoye could have repented and surrendered to Christ and could decide to step down from being the King maker but that would let evil thrive in full ways. He could have surrendered when he heard his life was in danger but he understood that that giving way to evil men to rule also meant giving room for evil men to lead the people.

Palliatives for the campaign are not required for the ideal candidate. If men know for sure that they can withstand the test of true leadership, then violent gun for power and malevolent meandering are likewise unneeded. Abejoye’s victory in the role of king-maker serves as a metaphor for how citizens will enjoy the governance they deserve if real men, rather than just religious or power-hungry ones, start to dominate. Let revival be begin that will usher in men to sit onn the top roles in politics. Let those men be men that can’t easily be bought, let them be men who haven’t engaged in evil oblations in order to become godfathers and leaders just to become the pain of citizens who serve them as slaves.

Nigeria needs leaders who, like Moses, would free them from the oppression of past Pharaoh and enable them to dwell in a land where milk and honey flow freely. Strikes by Asuu must become a thing of the past. Nigerians require leaders that care about both the system that welcomes new children and the kidnapping of people. Nigeria requires a revival, it doesn’t need the ruler ship of evil men.

May Nigeria have leaders that fear God!

40+1 movie titles you can relate with