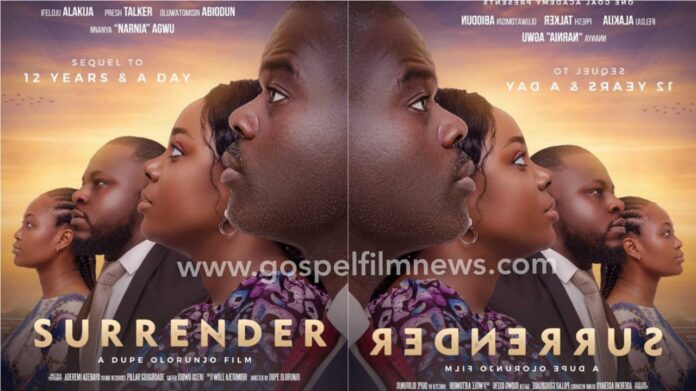 Hey folks! You’re welcome to the review of “Surrender”, a feature film from One Goal Academy. It was written and directed by Dupe Olorunjo.

“Surrender” is a truly remarkable movie. The first thing that struck me about it is the fact that it is a sequel, to a short movie “12 Years and a Day”, an adaptation of a Biblical story. I don’t think I’ve ever seen a short film having a feature-length second part before, at least, as far as gospel film production is concerned. So, that got me really interested. Gospel Film News. The first movie itself was a blessing to me: a creative retelling with realistic dialogue, effective delivery of lines and credible acting. This was replicated in “Surrender”, along with its skillful optimization of numerable cast.

Just when I was beginning to think that I might have seen it all this year in terms of top quality gospel movies, “Surrender” has come on the scene with a production in which the power and presence of God are palpable. First off, it gives you a story you can relate to, and I can’t stress how important it is for gospel movies to do this. Gospel Film News. The medium called film is one that should be intrinsically engaging; hence, no Christian film ought to be boring, more so in this Computer Age. We’re not talking about merely making the audience laugh; it’s about immersing them in a production through careful storytelling. “Surrender” goes further to give virtually every character an arc that would touch you in one way or another. 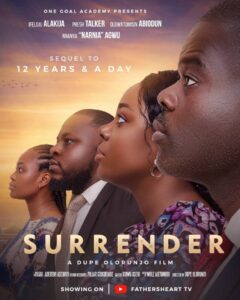 The best faith-based movies I’ve seen this year have either moved me to amazement, godly introspection, faith, prayer or action; this one moved me to tears, a renewed consciousness of God’s presence and a yearning for the kind of relationship God wants with His children, and many more. “Surrender” is itself an adaptation, and it’s amazing how the writer has linked up the two stories in the franchise, so far.

Conclusively, “Surrender”, along with “12 Years and a Day”, is a movie I would recommend that you watch 200%.

Alright, we’ve come to the end of this review. Have you seen “Surrrender”? What did you think about it? Please let me know your thoughts in the comments section below. The links to both movies are below:

EXCLUSIVE: Timmy Adebola narrates How He Moved From Secular into Gospel...