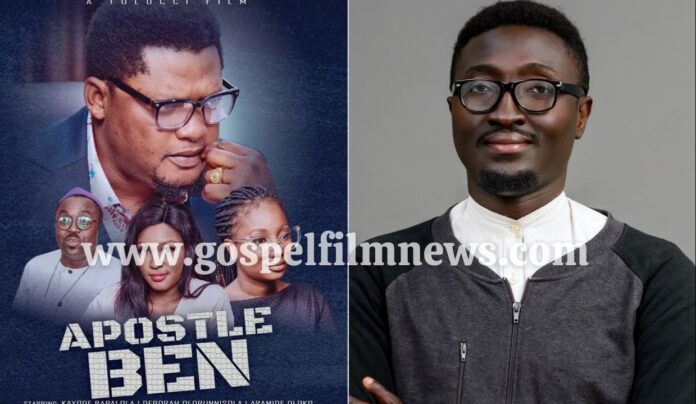 Apostle Ben is a riveting motion picture that centres on life in the marketplace or workplace and what is expected of children of God there. Ushered in by cool jazz music, its opening scenes set the mood for an interesting watch. It was quite refreshing to see a movie whose key setting and tone were official. Hearing a lot of shoptalk in specific fields isn’t a common experience in watching faith-based movies; so, I really enjoyed this one.

Apostle Ben has something that I’ve sorely missed in many Christian films this year – a good story. It’s quite obvious that the concept for the movie was born from a burden, and it was well executed. I love how it initially leads us to Cossy before taking us to Mr Oluremi. That way, its major characters receive the sufficient development its runtime allows. The twist felt organic to the plot and the editing brilliantly navigates a lengthy all-important narration by creating an illusion of oscillation in time passage.

This is not to say that the movie couldn’t have done better in, for example, occasional overacting by a few characters, glaring dialogue replacement, flash-timed reaction shots and B-rolls, unnecessary discrepancies between dialogue and subtitles, and unimportant snapshots at the end – all of which were a bit distracting for me. However, the overall quality and content of Apostle Ben far outweigh any of its shortcomings in my opinion.

Another thing I have to give Apostle Ben credit for is that this is one movie that knows where to insert and commence the right kind of music at different points in time. It furthermore does this justice by including every song and tune used in it at the end credits for easy reference. More impressively, they were composed and performed fully or in part by the producers. The end credits surprisingly came after an epilogue that contained a powerful charge for Christians to reflect Christ in their workplaces and for anyone serving Him to be confident that God never fails His own. They were accompanied by a catchy end credits song intro that has become my new favourite. I recommend this film for your viewing pleasure and blessedness.

The link to the movie is https://youtu.be/r9loYbvIvQA