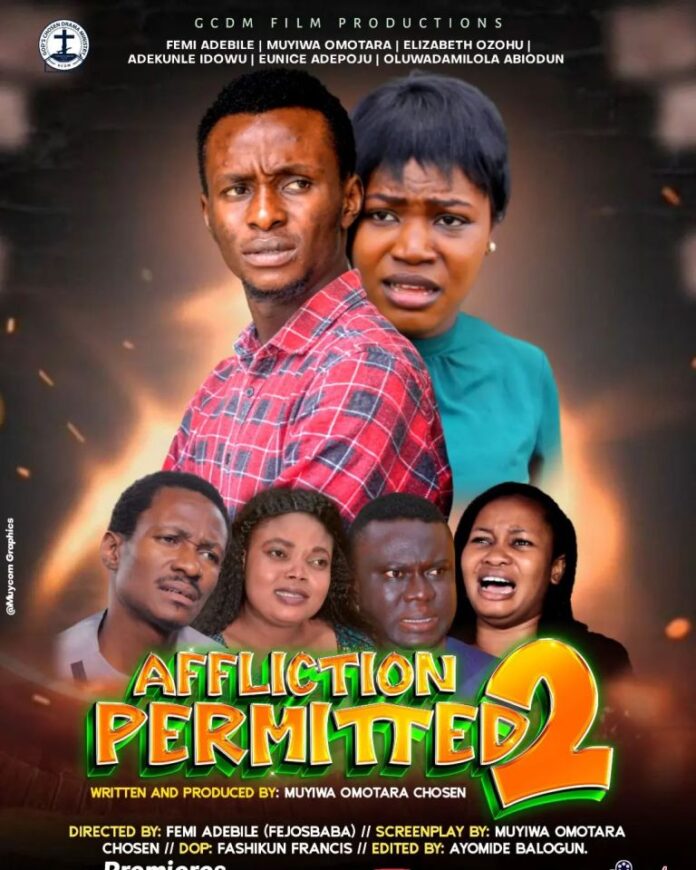 Affliction Permitted 2 shares a similar thematic preoccupation with its original movie, which, in my own words, is the importance of being in alignment with God’s will for our lives. It shows that a different positioning could spell doom even in the lives of God’s people if not quickly redirected. And this is true: we cannot claim to be genuine children of God if we do not obey Him. That would only mean that we worship Him with our lips, while our hearts are far from Him.

This film’s plot, I would say, is rather harsh on its characters. A new persona, Faith, has her marital life begin Affliction Permitted 2: Despite God revealing His marital “choices” to her, they inexplicably end up getting married to other ladies. Her epiphany dictates that she has been spiritually lethargic, and within the first third of the movie, this conflict is resolved. What this sequel tells the audience contradicts what it shows us about Faith: I feel that if nothing else, she exhibits unwavering trust in God after years of marital disappointment. That God would reveal His will to her and then keep mute about a supposed lack of fervency is utterly unlikely. Making the matter direr, this subplot is completely inconsequential to the main plot and thus, should not have been included in the first place.

In the lives of the protagonists, Benedict and Loveth, Affliction Permitted 2 seemed to have forgotten where its original movie ended, thus causing ambiguity in its initial temporal settings. In retrospect, it was probably done in order to set up its villain’s motivation, which from the get-go I’d perceived to be a forced and cheap justification for such a core part of the movie’s conflict. It therefore bothers me that after all the crisis and resolution in Affliction Permitted, Benedict and Loveth experience more losses in this second movie, and the manner of it confounds me.

1Corinthians 10:13 tells us that God would not test us beyond our ability and would always make a way out. Furthermore, James 1:13 enlightens us that God does not tempt us with evil. How then could one of the God-representations in this movie say “Mission accomplished” after the greatest tragedy the couple had ever known befalls them? How could a person Jesus died for be compared to Job who didn’t have God’s promises in the covenant sealed with the precious blood of the Lamb? How would God lead Benedict to leave his ailing son to minister healing to another sick child whose diabolical father’s monetary gift would cause that son’s death, even after God had promised healing for him? I find these scenarios to be inconsistent with the scriptures.

Technically speaking, the sound design for movies could involve original soundtracks, non-copyright tunes and a skilful use of silence across different scenes; extended and repeated use of the same instrumentals is monotonic. Also, movies with God-characters need to get His costume, and grammaticality of His dialogue spot-on. On a general note as well, original films that point to a God-given assignment for the protagonist need to put in more effort to show the expanse of such tasks in their second parts.

It is my prayer that for subsequent productions, the story will be critically looked into, so that all nations will see God as He truly is – One in whom there is no darkness (1John 1:5).

The link to the movie is https://youtu.be/4UgfJ44Jves

The secret of miraculous life by Mike Bamiloye