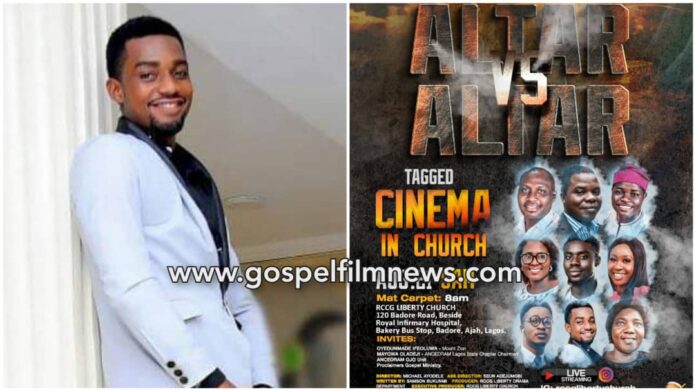 Creativity they say is a Hallmark of success. The Drama Coordinator of The Redeemed Christian Church of God, RCCG Liberty Church, Mr. Samson Nolimit has proven to be creative by coming up with a concept, ‘Cinema in the church.’ At the Cinema in The Church coming up on Sunday 21st August, 2022 a drama entitled ‘Altar Versus Altar’ will be staged. In this exclusive interview with Samson Nolimit, he disclosed how they came up with the concept, benefit to get from coming over, among others. Excerpt:

Can we meet you?

My name is Samson Nolimit. The Drama coordinator of RCCG Liberty church, Lagos.

How did you come about the concept of cinema in the church?

Hmmm … It actually came in a different way. It was first tagged Drama Sunday. So, my wife and I just thought of giving it a different name since drama Sunday as become a popular thing. So we came with the name ‘Live on Stage drama Sunday’ and we discovered it was too long. so we sat again with one of our members, Mr.Sunday omoh osax and we came about ‘Cinema Sunday,’ we were so eager for the next Sunday to come so we can update PSO on the new name, alas PSO turned it down. We went back again and one thing led to another and we got a restructure of the name ‘cinema in church’ and it was approved.

You have invited people to come see a stage drama titled Altar Versus Altar, what should people expect?

I encourage them to come watch with their faith and also see another wonder of God in a mysterious way.

Is this cinema in the church going to be a continual thing or just once and for all?

By the grace of God, we hope for it to be a continuous thing that is why we have it ‘CINEMA IN CHURCH 1.0.’

Stage drama over the years seems to have been substituted with film, what’s your take on this?

Well I see nothing wrong in that and let me say the filming part is another way of reaching out to more people outside the box of your area but a stage ministration opens door for altar call and proper physical follow up on new converts. In nutshell, both are good just follow God’s lead and don’t follow people opinion because GOD’S OPINION ISN’T EVERYBODY OPINION