A big event that will pull thousands of participants from across the Southwest and North Central States of the Country including Kwara and Kogi States is set to happen at the capital of Osun State, Osogbo Nigeria. 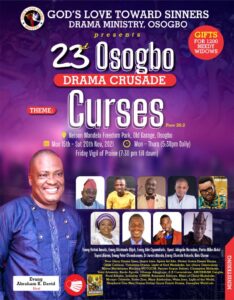 The Drama Crusade which is entitled “Curses” is taken from the book of proverbs 26 Verse 2.

The host, Evangelist Abraham K. David made it known to Gospel Film News that the programme will start Monday 15th to Saturday 20th November 2021 by 5:30pm daily. Vigil of Praise will hold on Friday 19th November by 7:30pm.

Evangelist Abraham added that everyone should endeavour to get a nose mask, and there will be gifts for 1200 widows.