The annual drama ministers conference will hold in grand style this month. 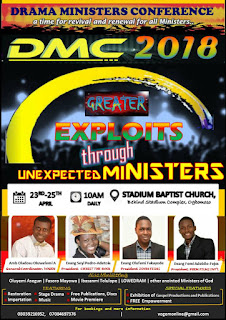 The conference will hold between April 23rd and 25th, 2018 at Stadium Baptist Church, behind stadium complex Ogbomosho, Oyo state.

According to a statement sent to the news room of Gospel Film News, the convener, Oladosu Oluwafemi the program is designed to gather ministers for Revival, renewal, Refreshing, Impartation and many untold encounter from God.

Oladosu disclosed that God is ready to set people on motion with fire and unction at this time.

The convener however noted that the programme is not limited to Drama Ministers alone but also for media ministers, music, publications and the likes, saying the focus will be all round touching, ministerial and personal flourishing, empowerment, Movie premiere and so on.

It was reported that ministers like Femi Adebile, Mayowa Fasoro, Femi Fakoyode, Seyi-Pedro Adetola among others will be ministering at the event.

He disclosed that there will be side attraction such as movie exhibition, music exhibition, publication exhibition and intensive empowerment training.