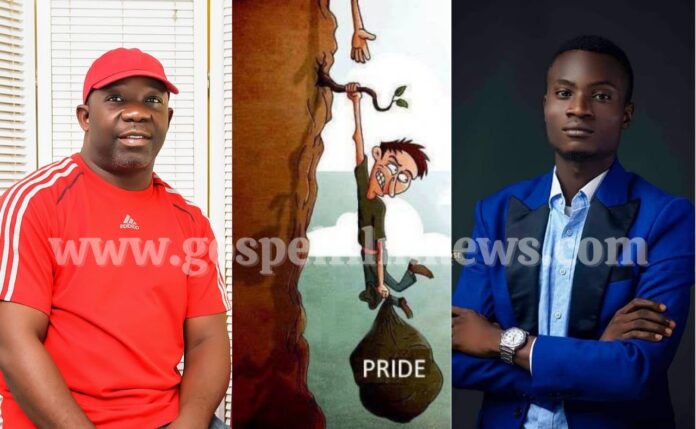 Ever since upcoming filmmaker, Oluwatomisin Akintayo Fasola dropped a comment which has been tagged insult on Ace Cinematographer, Ben Ope Johnson’s post, fans of gospel films have started reacting.

In his reaction, a fan of gospel film, Elesho Timothy cautioned upcoming filmmaker, Oluwatomisin not to allow pride and arrogance kill what he should humbly become, Gospel Film News learnt.

According to Timothy, “I lost every bit of respect I had for this boy following this post he made on his instagram and Screenshot of it on his Facebook page., I engaged him that he had nothing to gain pulling this platform down because of the first misinformation they had, it was on Abattoir, I asked him to refer to just 5 false updates they made but he was unable. Then, why can’t you reach the platform via inbox and make your grievances known.

“His responses that day showed who he was. I had to let him be, not knowing he will still come to Daddy BEE-Jay space to do the same, obviously butted on what he and many had sat to discuss.

“Tomisin, I said it that day and I will still say it again, just because you are close to a popular ministry does not mean you will stay with them forever, some were there before you and you will leave the same way they left. You are not going to be on the stage forever, so don’t let arrogance and pride kill what you should humbly become with the help of those you have already fought in and out.

“Do you even read your Bible? Noah, Eli, Saul, David, Peter; Thier subordinates Noah’s children, Samuel, David, Prophet Nathan and Paul respectively never took to the public space to announce thier errors! They spoke with them directly… So, what have you done?

“His seniors should call him to order. He’s not representing what many of us know what the ministry he’s serving under for. God bless.”

Another reaction from Dr Godwyns Agbude reads: “It seems this response is hinged on a misunderstanding of the original post or the intent of the original writer – Beejay. Perhaps, it was borne out of obvious grievances locked up in the mind for a long time. Maybe, it is a byproduct of personal experience with the writer. Whichever way, let love reign.”

For his part, a filmmaker, Oluwaseyi Raphel noted that: “Mmmmmm, I will say OMODE lohun se,omode to bere tounwo idi agba ni, bope boya omoleyin ase ru e fun. But Candid advise for him (Oluwatomisin akintayo) to apologize for saying those rediculous words to an elder on social media because if it doesn’t affect him now it will affect him later.”

Another fan named Afolabi Mayowa said: “Daddy let them say anything they like people that have no record of success will not understand the meaning of success.

“Let them keep looking for results until they realize they are not useful to there generation. It is not easy for someone to come all the way from Ifo ogun state to ibadan for training if i have not seen the rest of the past.

“Don’t mind them because prophet doesn’t have value in their home town. You remain the best.”

Funmi Adewola noted that: “You are graced sir, this person doesn’t come here to add any value to the debate but accusations. Yet, you receive him as a brother and explain things to him. I pray may salvation find him. Those who have been saved from self don’t speak in certain ways that are evident here. Pls, I’m interested in seeing any work that you have done either as a film director, actor or screenwriter. Can you mention a few?”

Joseph Oladunjoye wrote: “Oluwatomisin Akintayo Fasola I’m sure u will be calling yourself a drama minister o, let’s see what u have done that has produced results. Olofo.”

Toba Oduwaiye said: “please post your work here lets learn from you. Its not about views on YouTube. People will watch any junk on YouTube cos its free. It doesn’t mean that its technically flawless.”

Oluwasola Luyomi wrote: “Oluwatomisin Akintayo Fasola This is actually none of my business…. But!.. at the end of the day.. this post speaks more about you rather than the person you are accusing… No matter what sir… We should learn to respect and honor our elders… Even if you have issues with all that was said.. leave it for those ahead of us. Let’s those that are of same age bracket trash it out with Him…. This is a libelous statement…even in the Bible… Despite Saul’s failure..David won’t spare anyone that spoke Ill of him because Saul was once an anointed man of God… This isn’t a message you have passed but a personal attack… And if you are a drama minister..you just lost souls with this action of yours.. this is way way too much sir… We young ones should never talk this way to those ahead of us..no matter what… You might blast me…I accept it in advance…it is well with you sir…”

Ayomide Emmanuel Aina stated that: “Asiwaju Ben Ope Johnson Daddy. I have never met you, but you have drilled me on excellence in filmmaking ON PHONE!! I fault the use of secular. Why do we go to schools to be a medical Dr as a Christian if all it takes is the Holyspirit. Why don’t you just wake up and enter the theater and operate a patient? You have to LEARN IT! IN A SCHOOL! Call it secular school, that is your business, you still have to learn it!

“It is a mediocre mindset that lets Christians do films without excellence and feel comfortable with it! If we serve an excellent God, it means our works have to be excellent too. Your film as a drama minister is a reflection of how you see God! I know how I see my God and honestly I don’t think there is any art director that can paint what i have in mind but because there is excellence for every level I know I have to subject my self to learn what I don’t know, grow, develop even if it will take me to go to a “Secular” film school to learn it! What I will do with the knowledge is most important because Knowledge is not power, application of Knowledge is power. Remember when we were told to go study the Ants in Prov. 6? We don’t have to become ants to study what they know!!

“Finally Mr Oluwatomisin Akintayo Fasola I doubt you have Spiritual fathers in Drama Ministry you submit to. If not, you would have learnt well on how to respect fathers who have gone before you. You don’t have to like everyone, but learn to communicate effectively without being abusive or dragging anyone down. Effective communication is an important aspect of excellence which I do not see much of it with your expression.

“Don’t talk to my father in this manner! Don’t sir. I won’t let you do such!”

Ikechukwu Patrick Neife said: “God bless all Gospel Drama Ministers. If there is still a vacant space in the WhatsApp group, I will love to join sir.”

Lateef Olawale wrote: “We are available to learn from each other. No one is an island of knowledge. If you create it add o, we young boys need to learn from the masters.”

Ayeni E. Oluwasegun wrote: “Oluwatomisin Akintayo Fasola Did I just see you brag about number of views on YouTube? The same YouTube where a video ‘on how to drink water has over 2M views’?

“Just tell me, who on earth doesn’t know how to drink water? It is an innate ability bro yet people view it. That tells you people view anything on this space.

“Your highest views on YouTube is what Naira Marley will make in 10minutes, does that mean he is doing something positive? Answer me.

“Let me quickly chip this in, don’t be deceived by the number of likes and subscribers, they pay for all those things bro.

“But in all honesty, I will like to see your channels of 2 billion subscribers and 1 trillions positive reviews, kindly drop the link please.

EXCLUSIVE: The fear of hell inspires me as a film maker-...

Best actors are in the body of Christ! – Victor Olukoju