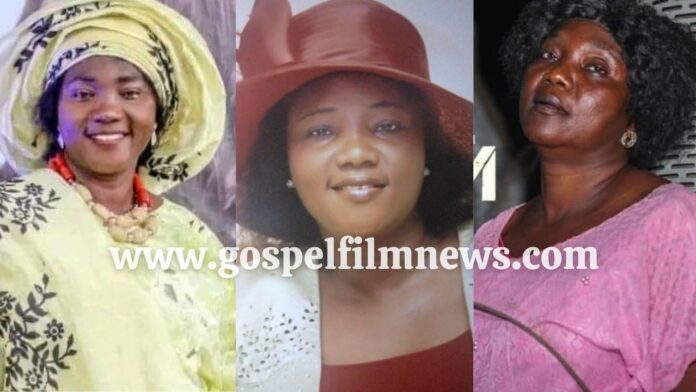 There is now a change of venue for the commendation day to be held by Gospel Film Makers under the aegis of All Nigeria Conference of Evangelical Drama Ministers, ANCEDRAM Lagos Chapter in honour of late Gospel Actor, Folashade Aina, Gospel Film News can confidently report. 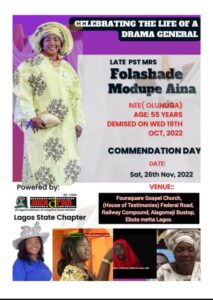 The gospel actor who died on 19th October, 2022 was laid to rest on October 27th, 2022 at her hometown in Ijebu-Ode, Ogun State. The late actor was until her demise one of the vibrant elders in ANCEDRAM Lagos State Chapter.

Oladeji further stressed that it is time for all drama ministers to show love and celebrate the life and passion of the drama icon who departed the world.

According to Oladeji, the commendation day is scheduled to hold on Saturday, 26th November, 2022 at Foursquare Gospel Church, Sabo Yaba from 10am to 1pm.

He noted that Pastor Mrs. Folashade Aina was a cast on stage of life who interpreted her role brilliantly before God withdrew her to back stage (heaven).

He therefore call upon all drama ministers within and outside Lagos State to attend the commendation day so as to celebrate the departed minister.

The State Chairman added that the Dress Code for the commendation day is White shirt on black skirt/trouser.

DIRECTION TO THE VENUE

From Yaba, Ketu, ojota, board bus going to Yaba-Oyingbo and alight at Alagomeji bus stop and ask of the venue

From yaba, ask of Railway Compound, take a bite from the gate to the venue

From Obalende take a bus going to Yaba, alight at Alagomeji Bus stop, ask of Railway Compound or walk down the road beside Oando filling station, You will see the Railway Compound at the End of the Road

From Oyingbo, ask of Railway Compound and take a bike to the venue