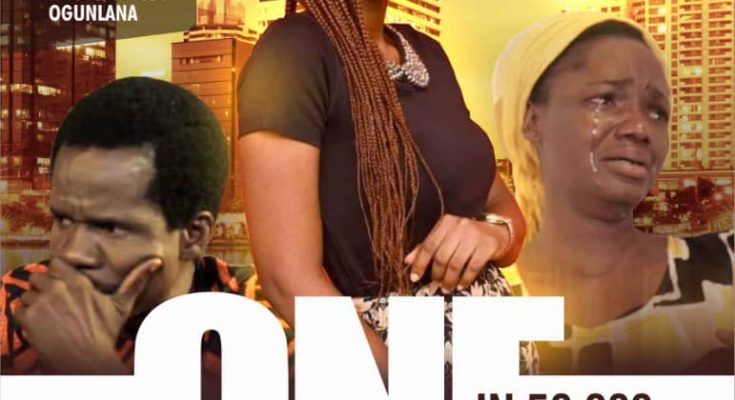 After watching Mojisola Ogunlana’s One in 50,000 I was stunned by the excellent theatrical work of this film, but I couldn’t cheer the writer because I was so emotional throughout the film, I’m certain that the Director Kayode Babalola understood the kind of script and story given to him to Direct so he knew he had to put in a lot to get the Job well done, and of cause with critics like us around he knew he just had to do a good job.
One in 50,000 is a highly emotional and pathetic story aimed at creating awareness about the Treacher collision syndrome a rare disorder that occurs in one out of 50000 people, was the aim of sensitization achieved? Yes if you ask me, as the movie broke down symptoms and details of the management of the disorder. The story was based on true events that happened to the story writer Mojisola Ogunlana.

One in 50,000 tells the story of a Christian couple played by Victor Olukoju and Omolara Ayoola it focuses on their daily struggles of how they were able to manage and cope with their daughter Boluwatife who was born with a rare disorder that occurs in one among 50000 people. There were days of weeping, suicidal thoughts, quarrels, regrets, sorrow, complains, murmurings, blaming God and many more tragic moments but in the end, Boluwatife and her parents realize she was created in the image of God differently for the purpose of giving hope to other hopeless children and cases.

One in 50,000 was brilliant I liked the fact that the Producer Mojisola Ogunlana and Director Kayode Babalola understood that this is not just only a normal regular Evangelical movie but also a movie aimed at creating awareness about a particular health condition and so necessary equipment we’re provided which birthed a quality production at the end of the day. I doff my hat for the script and screenplay writer Seyi Pedro Adetola, I kept wondering how she was able to put the story together, the dialogues and bring it to such a comfortable ending Kudos to you Ma’am. The Casting was great as well each character suited the roles given. Omolara Ayoola was so believable she soaked herself deep down the character that one could just connect with her easily. Victor Olukoju was outstanding as well all other characters were brilliant in their interpretation of the roles.

The Cinematographer Kunle Adepoju and the lights man used their camera and lightning to tell the story better and bring out the essence of each scene Kudos to them. The subtitles were done well and necessary.

Howbeit one in 50,000 isn’t without faults starting with Victor Olukoju and Omolara Ayoola costumes and house the couple were looking too elegant for people who can’t afford 1500 isomil, their house as well was not appropriate for their status as an average struggling family.

Secondly in the scene where Omolara Ayoola’s bag was snatched people were seen just walking pass while she was shouting and wailing this is not the attitude of Nigerians as many would have come to her aid if for nothing to console her or find out the problem.

Thirdly in the first scene, the Doctor played by Ayo Cineman Olayeye says we need to refer the child to Mercy Children hospital for proper Investigation I think the word should be Examination not Investigation as Investigation is only used in criminal cases or cases that demand Justice from Court of law.

Fifty Infant Boluwatife was not moving and was too stiff. Making it seem she was lifeless and not the one crying.

After all said One in 50,000 is my best movie so far in 2019 this movie needs to be screened at TIFF Toronto International Film Festival, this is a big movie and should be well publicized, to me this movie is Hollywood Standard and Deserves an Oscar, but let’s start from AMVCA 2019 I call on authorities to please recognise this masterpiece One in 50000. Kudos to the cast and crew for a Job Weldon.