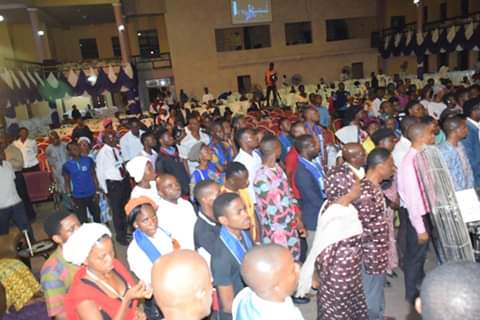 It was indeed an open heaven as Evangelist Mike and Gloria Bamiloye of Mount Zion Faith Ministries ministered at first Uyo drama ministers conference and power night in Akwa Ibom.

People trooped out en masse for altar call after which Mike Bamilioye ministered powerfully in word on the theme ‘what vessel are you.’

Our correspondent reports that Mike Bamiloye who had earlier had a meeting with leaders of All Nigeria Conference of Evangelical Drama Ministers, ANCEDRAM noted that he was persuaded to encourage the leaders with the word of God which says that God will reward everyone according to the work he has done, noting that people may not notice the sacrifice they are making by travelling from one part of the country to another but God is surely taking note.

Bamiloye who is the chairman of ANCEDRAM Board Of Trustee charged the leaders to work for God wholeheartedly, reminding them of how God blessed a former national president of the association immediately after his service as a president.

He further stated that the unpleasant story is that God’s reward will not be equal for He will rewards everyone according to his work. e will re