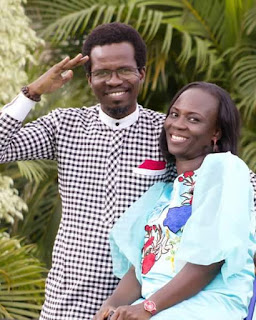 By Oluwafemi Dosu
Wife of the gospel actor and sexual purity ambassador, Victor Olukoju is calling on the whole world to celebrate his husband on his birthday as she pen down some accolades to celebrate him.
Francisca Olukoju in her write up revealed that Victor Olukoju is her mentor, hero, superman, coach, instructor, playmate, gist partner, brother, prayer patner, friend and soulmate.
Gospel Film News gathered that the wife took to her facebook timeline earlier today 14th of November, 2018 to pen down some accolades for her husband.
“Wow! At last the day is here! Blessed be that glorious day a divine gift from God was released. The advocate of sexual purity,  is year older today. Let the whole world celebrate with me this bond servant of Yeshua. Darling the best of you is yet to come,” she stated.
Francisca continued: “We celebrate you today because you mean so much to us and your existence is really amazing. Bask on in the grace of Him that called you.”
In her prayers she stressed that PVO will never know a better yesterday, his head will never lack the oil of God, saying fresher and better he will get on daily basis, adding that more Grace to him  in Jesus name.
The only wife of Victor Olukoju concluded by declaring that she will forever be in love with him, wishing him happy birthday and happy world sexual purity Day.
A report reaching us says different gospel film makers and some people PVO has impacted have also started celebrating him on different social media platform.

Victor Olukoju is a gospel actor, fillm producer who has featured in a number of gospel films and produced some including ‘Akobi Laaroye.’