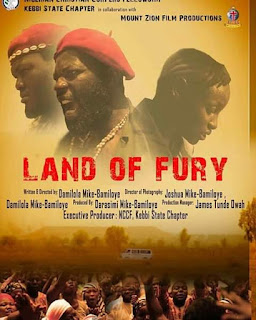 By Oluwafemi Dosu
The popular gospel movie, Land of Fury which is a joint production of Mount Zion Faith Ministries and Nigeria Christian Corpers Fellowship, NCCF Kebbi State is set for released on DVD after world premiere.
According to a statement issued today by the president of Mount Zion Faith Ministries, Evang. Mike Bamiloye, the movie will be on DVD and available for sale soon after being Premiered in several Churches in Nigeria, UK, USA, BELGIUM, CANADA and AUSTRALIA in over 150 Premieres, and still counting.
Bamiloye disclosed that the revolutionary revival movie shall be officially released on DVDs for public and individual outreaches at Drama Ministers Power Night on Friday, December 7th, 2018.
The quarterly power night will hold at Jogor Center, Off Ring Road, Ibadan. Land of Fury will be available on wholesales and retails.
Recall that Land of Fury which was shot amd directed by Damilola Mike-Bamiloye was earlier ranked among top ten movies to bewatched before end of 2018.