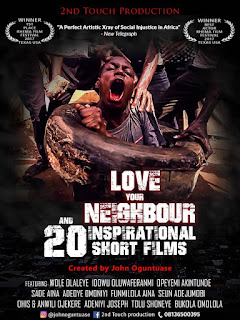 By Oluwafemi Dosu
The short film guru and director, John Oguntuase is set to release another collection of short films titled ‘Love Your Neighbour & 20 Inspirational Short Films’ under the agies of 2nd Touch Production.
Oguntuase who disclosed this to Gospel Film News recently in Lagos noted that the collection which will be released this month comprises of his film that won award abroad, Love Your Neighbour and other 20 inspirational short films.
Love Your Neighbour which according to New Telegraph is ‘a perfect artistic xray of social injustice in Africa’ won awards as 1st place in Rhema Film Festival 2017 and best actor, Rhema Film Festival 2017 in Texas USA.
Veteran actors like Wole Olaleye, Idowu Oluwaferanmi, Opeyemi Akintunde, Sade Aina, Adeoye Omoniyi among others featured in the collection.
Recall that Oguntuase released some collections like ‘The Ladder+10 shirt films’ and ‘The Still Small Voice’ which enjoyed sales across the nation and was shown on many TV stations in Nigeria. It may interest you to know that marketers and distributors are still requesting for the first collection because of demand in market.
There are a large number of his films in this new collection that has not been released online and  more episodes  like ‘what if’ series.