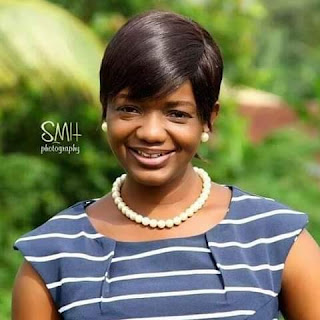 Despite lack of sponsors for gospel films in Nigeria and the economic situation in the country, the gospel film makers are doing everything possible to ensure quality productions that can stand shoulder high with international standard. In this exclusive interview with Gospel Film News publisher, Oluwafemi Dosu, a star actress and TV presenter, Omolara Ayoola has revealed that things are getting better with gospel films on a larger scale. She also disclosed why she crossed from secular film making to gospel film making. Excerpt:
Who is Omolara Ayoola?
She is a child of God, a drama minister, a TV presenter, married to Olugbenga Ayoola. The President of Wall foundation an NGO for girls only.
Could you please lead us to your professional background?
Professional background? Hmmmm. I can’t remember any profession.
What is the meaning of PMH and how do you come about the name?
PMH means Princess of the Most High. My husband is called SMH ( Son of the Most High) He gave it to me when we got married. I didn’t want Daughter of the Most High(DMH) because I am not just an ordinary daughter but a Royal girl.
How did you meet  your husband SMH?
I met my husband at the Mount Zion Institute of Christian  drama in  Nov. 2009.
What other thing do you do apart from film making?
I am a TV presenter, a voice over Artist and also a business woman. I have an NGO for ladies only.
Recently, we noticed you started transformational ranting, what is it all about and how did you come about the inspiration.
The transformational ranting started from the Mount Zion Institute in May 2018. Where we were given an assignment to do transformational ranting on any topic of our choice. I did and it made sense. That was the beginning.
What can you say about the kind of gospel films being produced this days?
On a large scale things are getting better with Christian movies. A lot of young people are rising up to give the best to our God.  I believe in excellence, so we are on a journey and it can only get better.
How do you handle the roles given to you and intereprete it convincingly?
I can do nothing of my own but for Grace. Yes the part of physical preparation can never be ruled out. Yes I rehearse, i watch other movies to equip myself but most importantly I pray and sometimes fast in preparation for the role. The quest to give my best in all that I do is what drives me to go extra mile to prepare for any location and through the help of God it’s been a good journey. God has been faithful.
Why do you cross from secular into gospel film making?
It was a clear instruction from God which i battled with for sometime. I was on location one day when God gave me 2 Cor 6:17. I struggled for a while but when I lost my peace I had to move camp. One of the illustrations God gave me was that I have a special assignment to young ladies to preach sexual purity. How will I be able to do this assignment without confusing the mind of these young souls.
What is your take on showing gospel films in cinema?
I don’t have any problem with gospel movies in the cinema. In fact, there are perfect audience for it. Afterall I go to the cinema to watch other movies that are not gospel so it won’t be a sin to take the gospel of Jesus to the cinema if you are led to do so. Motive is very important in all of these.
To get you involve in a film project as an actress what are the requirements?
There is no special  requirement. Just give me at least 2months notice, I will pray about it and once I get a clearance in my spirit. We are good to go. Well, to be sincere some locations are accepted based on relationship. So, requirement may not come to play in this.
How do you think gospel films can reach a larger audience?
We need to hype our movies a lot. Someone said many gospel film are released like a thief in the night. We should also crave for excellence and put it into practice so we won’t lose out some audience.
What is your advice for upcoming actress?
They should stay with God. Learn to say no when some people ask them to do what goes against their moral values. Like kissing, and exposing their body. They must be strong enough to take a stand and never be afraid to state out their reservations for some excesses in some of our gospel film.
What can you say about Gospel Film News?
Gospel Film News is doing a fantastic job. Many may not appreciate it now but a time is coming when they will pay to have their news published on your blog.