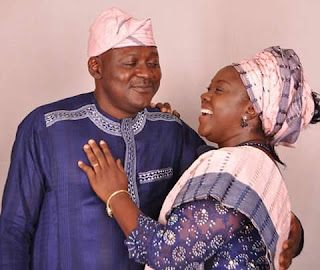 Today 21st of November, 2018 is the 26th wedding anniversary of veteran film makers, Rev.’Yemi and Prof. Feyi Adepoju. The marriage has been a tremendous blessing to many homes and youths both within and outside the country. In an exclusive interview with Gospel Film News publisher, Oluwafemi Dosu this morning, the Ace film maker and former national president of All Nigeria Conference of Evangelical Drama Ministers, ANCEDRAM, Rev. ‘Yemi Adepoju revealed how he met his wife and some of the things the marriage has experienced. Excerpt:
How and where did you meet your wife?
I met her at her Sister’s place in Ilorin, my brother was living in the same building with her sister, I went there for a visit. I heard her voice speaking outside and I ask my brother ” who’s”  voice is so beautiful and my brother called her to introduce her to me
What convinced you that she will be your wife when you met her?
We have been friends for some years and seeing many good quality in her but one day, we went out and I don’t have money on me to pay for our taxi fare instead of her to pay directly to the taxi man, she secretly put the money in my hand to pay by myself, that action speaks volume. It tells me that she will submit everything she has to me because any lady would have given the money to the taxi driver directly.
How long does it take her to accept your proposal?
Not too long
At what age did you marry her?
I was 27 and she 25.
What has been your major challenge(s) for past 26 years?
Our marriage has been with less stress though not stress free. One major problem is coping with the number of work in our hands, we are both career officer with federal government, we are both Pastors, Drama ministers, she has a private clinic and I have a business I am doing. But the Lord has helped us to cope with all.
Your advice for couples generally
They should see marriage as an institution with no option than to stay put, with that whenever problems come, the only option they have is to solve it and move on . Above all husband should love his wife as Christ love the Church and the wife must return the love. Once a woman is married, she must be ready to submit to the man no matter the level of achievement. A woman should not marry a man she can’t submit to.