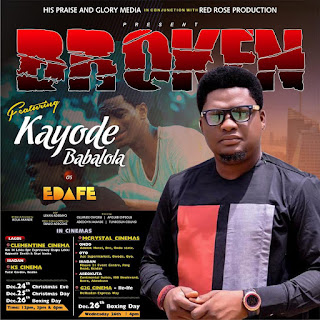 The excellent Gospel Film Director and Actor, Evang. Daramola Kayode Babalola has declared that a the latest movie produced by Evang. Bola Akande titled Broken is a clear departure from usual Christian films. The film Director stated this in an exclusive interview with Gospel Film News. He also expressed his satisfaction on the film which will be in Nigeria Cinemas this December. Kayode Babalola equally told Gospel Film News his expectations from gospel films in Nigeria. Excerpt:
What can you say about the movie, broken?
Broken is a clear departure from your usual “Christian’ film. Every aspect of the production was given special attention: casting/acting, equipments, crew and post-production.
We knew where we were going from the beginning, we shot with cinema in mind and we bless God for the outcome.
What role did you play in the movie?
I acted Edafe in the film and I was also the assistant director on set.
When you were told you were going to play that role, what came into your mind?
Edafe was supposed to be from Delta. I knew I had to infuse some pigin English in my dialogue. So I decided to play him as an unserious , happy-go-lucky guy. Edafe’s part was actually a sort of comic relief in the film.
When you go through the script what dropped in your mind about the movie?
Reading the script for the first time, I love the short dialogues and the fact that the scenes weren’t too long. The diversity of culture and the uniqueness of each character complete with their traits and mannerisms also stood out.
On closer look however, the subject being treated is not a common subject and it’s often spoken about in hushed tones in African settings. Incest exist. We see it everyday. We read about it in news and on the social media. But no one wants to talk about. I dare say it is a bold move by the producer/director of this project to treat this subject.
Also, one of the reasons we don’t talk about some issues is because people  hastily ascribe it to having come from personal experiences. If she is talking about incest, maybe her father used to sleep with her when she was young. Maybe her husband sleeps with her daughter. It is the silly product of myopic minds to personalise our stories and not see it as either pure inspiration or revelation from God.
So women creatives run away from treating the subject of rape, domestic abuse or incest for fear of being stigmatised. Therefore, for Bola Akande to dare to address the subject headlong, big kudos.
Now that the movie will be in Nigeria cinema soon, how do you feel?
Happy. Excited. Anxious. Cautious.
Happy because it is a job I was fully involved in as cast and crew and you are always happy when your job is finished and can get to the audience.
Excited because as a major stakeholder in the  Nigerian Gospel film industry/ ministry, it is our joy that a message reaches the uttermost ends of the earth and the cinema is a relatively untapped land that we have been believing God to conquer. So , gospel film in the cinema excites me beyond measure.
Anxious because I’d like to see how we fare. The challenge before us is that we are representing a much larger people and people’s experiences with ‘Broken’ may determine whether they answer the next time another gospel film comes to the cinema. Will they enjoy this experience/experiment? Or will it leave a sour taste in their mouths. Will they jump up in excitement and punch the air saying ‘yes, this is it. This is what we have been talking about. Gospel films are great Afterall, we just have been too wrapped up in Nollywood to notice’. I just pray we represent well.
Cautious that because this is a new experience, the turn out for all the screenings may not be as record breaking as those of non – faith based productions.
Because of this , we should not throw in the trowel. We should not be discouraged. We should see this as a learning curve and building blocks to improve upon. With consistency in excellence, we shall achieve the heights of which we have dreamed.
Can you recomend the movie for people to watch?
100% recommended. Money back guarantee.
What do you have to tell the general public, especially lovers of gospel films about the movie, Broken?
So we cooked a stew. We tried our best at the time considering available resources. The soup is ready. It is a sweet soup even if we say so ourselves. Do not ask for free tickets. Come and support this great movement.
We promise you it’s going to be money well spent.
It will be worth your time.
It will be worth your resources.
You shouldn’t be told.
Lives shall be blessed. Destinies transformed. Burdens lifted. Souls saved. Hope restored. Dreams revamped. Visions renewed.
Turn up for ‘BROKEN’
Turn up for JESUS!