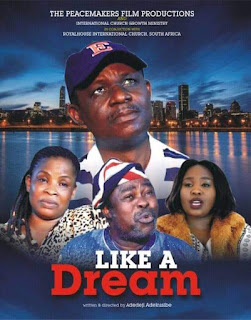 By Oluwafemi Dosu
The Peacemakers Film Productions is set to celebrate her 20th anniversary next month, also to release a film to commemorate the anniversary.
In an exclusive interview with Gospel Film News, the president of The Peacemakers Ministry, Evang. Adedeji Adekusibe disclosed that the film which is titled ‘Like A Dream’ will be released during Christmas and New Year celebrations including premiere in churches as well to commemorate The PEACEMAKERS Ministry’s 20th Anniversary.
Adekusibe noted that “the film is about a brother (Bode) who stole the C of O of his father’s house and used it as a collateral for a loan. As soon as he collected the loan he lied to his wife and ran to South Africa. The Finance Company later took possession of the property and sent Bode’s father and mother out. The father then placed a curse upon whoever stole the document which eventually affected Bode as he could not make headway in South Africa.”
In his words, Bode later met with Christ over there and has to come back to Nigeria and by the mercies of the Lord and like a dream the house was recovered.
He authoritatively told Gospel Film News that the film was shot in South Africa in May and the Nigeria scenes were shot in Lagos in October, 2018.
‘Like A Dream’ is an 80 minutes movie which editing is completed and subtitling being done presently. The film is a collaborative effort of The Peacemakers Film Productions, International Church Growth Ministry and RoyalHouse International Church, South Africa.