Skip to content
By Oluwafemi Dosu
The skilled cinematographer, Evang. Kayode Alao has finally opened up on why people, especially colleagues in the industry call him, OdeCam.
He made this known recently during an exclusive interview with Gospel Film News on a film location in Ogun State.
Kayode Alao told Gospel Film News that long time ago they were on set and something happened; someone who was to play the role of an hunter was not around and the producer of that film who also happened to be the director, pastor Ashikia just looked towards his direction and asked him to take up the role. 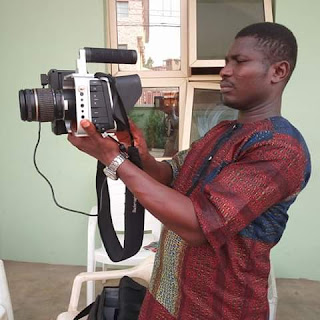 In his words: ‘’Pastor Ashikia said, ah, ha Kayode you should be able to play that role now, just give your camera to somebody to shoot while you act the role. So, i handed the camera over to my first apprentice then, Mathew Olayinka who is now based in Abeokuta and i put on the hunter’s paraphernalia (the uniform), i was acting with KSO then, though i can’t remember the title of that film. So, I and KSO acted together,’ he said.
According to the cinematographer, ‘’because of the situation on location after acting i couldn’t change that Ode (hunter) costume and i took over the camera immediately because then Mathew was just a beginner, and as i was recording with that uniform still on me, one of our sisters, sister Toyin was just coming and saw me in the uniform and said ah look at Ode (hunter) handling camera, this is OdeCam ooo, OdeCam and that was how the name came into existence.’’
OdeCam who later remembered the title of the film to be ‘Not time but life’ disclosed that it was shot in IjebuOde.