Skip to content
By Oluwafemi Dosu
The gospel drama giant and soul winner, Evangelical World Outreach Ministries, EVOM is set to release another blockbuster titled ‘On Strike.’
On Strike was shot October this year but yet to be released as it is at the post-production stage.
One of the cast of the film project, Olasunkanmi Solomon who played the role of ‘Omola’ has shared his experience on location and his impression about the message contained in the storyline. 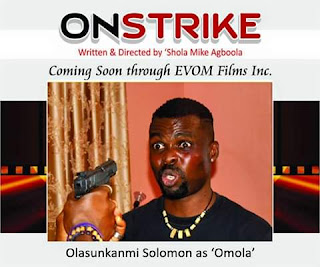 He recounts that his experience on location was really awesome, especially working with a director he respects so much, adding that he struggled to pronounce some words correctly because the director, Shola Mike Agboola would not tolerate mediocrity, saying he learnt a lot of things during the shoot.
Solomon noted that the twists, surprises and suspense in the movie are breathtaking, stating that he can feel the anointing on the message such that, even as a cast member,  he has been blessed with the message, and he is eargerly waiting for the release of the movie.
He concluded that he really thank God for the privilege given him to be a part of the great message.