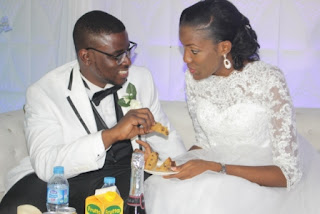 By Oluwafemi Dosu
It was indeed an atmosphere of overflown happiness over the weekend at the wedding ceremony of Damilola Mike-Bamiloye as a clergy, Rev. Adelakun charged the couple to be more patient with each other.
Gospel Film News publisher, Oluwafemi Dosu who was live at the event reports that the wedding ceremony which took place at Bishop Adelakun Howells Memorial Anglican Church, Surulere, Lagos on 10th November, 2018 was between Damilola Michael Mike-Bamiloye and Emmanuala Ifeoluwa Evuoba.
The clergy noted that marriage brings about joy, happiness, intimacy and companionship, adding that maariage is the most beautiful experience in the world.
He further stated that any of the couple can make mistake at any time and can dissapoint at any time but only Jesus can give them the perfect thing they want.
In his speech, the chairman of the occasion, Ambassador Toyin tagged the wedding ‘The Wedding of The Year’ and prayed that their home will be home of joy. He disclosed that there will be disagreement in their home but because the prince of peace is in it there will be joy.
Amb. Toyin further revealed that he had a dream a night to the wedding though he has had a dream in a long time. In the dream he disclosed that he saw a setting like the wedding setting with a man in white and he concluded that in heaven there is always joy.
He reiterated that he was instructed via the dream to tell the couple to settle down and communicate, saying there is nothing they cannot settle. He also told the couple never to take any issue to their parents at home because it won’t work, praying that their home will be home of peace, joy and good report.
He however advised the parents to always follow them up with prayers.
At the reception, the bride launched a book entitled ‘Gbemi’ which was in a pack alonside some materials which was given to attendees. The Ace film maker, Evang. Kolade Segun-Okeowo also distributed free movie at the reception.
Dignitaries present at the ceremony include well respected film makers, Evangelists Shola Mike and Adegbayike Agboola, Kolade and Sunmbo Segun-Okeowo, Yemi Adepoju of VDG, Wole Olaleye, Adedeji Adekusibe, Paul-Esupofo Oriade, Segun and Titi Badejo, Ayobami Adegboyega and wife, Adenike Aderemi-Fashikun, Sade Aina, Sade Airebamen, Bola Oluwatuyi, John Oguntuase, Oluwaseun Adejumobi, Ayoola Omolara, Family Coach, Pastor Bisi Adewale, all Mount Zion Faith Ministries members with theri children, Alumni of Mount Zion Institute of Christian Drama, among others.
The traditional wedding was done earlier same day at the same venue.