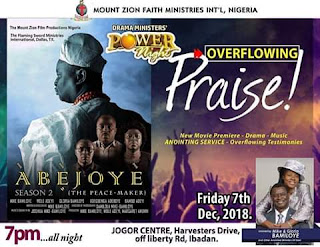 By Oluwafemi Dosu
The debut premiere of the much anticipated movie, Abejoye season 2 will hold next week.
In a statement released by the director of the movie, Evang. Mike Bamiloye Abejoye season 2 will be premiered on Friday, 7th of December, 2018 during the quarterly Drama Ministers’ Power Night at Jogor Center, Ibadan.
Abejoye season 2 which is translated The Peace Maker unlike the season one translated The Kong Maker will also be premiered in other six countries of the world that same day.
A source disclosed to Gospel Film News that the theme of the power Night which is ‘Overflowing Praise’ will have different people from different part of the nation will be present in their thousands to appreciate God.