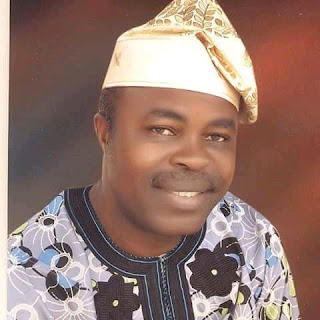 The popular gospel actor, Evangelist Wole Olaleye will be ministering at On Your Mark.

On Your Mark is a yearly ministers’ night, a night to discover God’s mind for his people. It’s a  power packed programme that awakens the slumbers, bring back the sinners to God and tell people more about the second coming of Christ through the ministrations that takes place. 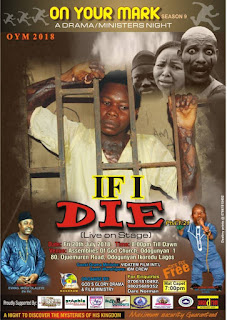 The programme is scheduled for Friday, 20 July, 2018 at Assemblies of God church, 80 Ojuemuren Road Odoguyan Ikorodu, Lagos from 8pm till dawn.

While speaking on how the programme started, the visioner,  Evangelist Dare Norman disclosed that he has a burden in him to reach out to souls, also to wake up the slumbers in Christ.

“We bless God so far, He has been faithful drawing men to Himself. Souls are being won into God’s kingdom and there has been lots of testimonies as regarding God’s goodness through the programme.”

“Evangelist Wole Olaleye is the Guest Speaker and we are trusting GOD in his life to bless us dramatically. As per why he is the one, the Bible says in the mouth of two or more a matter is confirmed. About two of us got that conviction, we prayed about it and went on to process his Invitation letter,” he disclosed.

Normal further explained why the title of the play is ‘if I die’ saying “While in the script conference, though we had our center of concentration after getting the scenery of the play, one of the conference members just said it and it was gladly accepted by all present. Since then, we’ve not stopped getting clear confirmations about the message.”

“We are expecting all Drama Ministers, Pastors, Christian Workers, Youths and as many that desire to reign with Christ,” he added.

The evangelist assured that security will not be an issue, saying the invitees are adviced to come early to the programme but nevertheless, Uniform men will be fully on ground for guaranteed maximum Security.