The pioneer of  Internet Drama-Film Evangelism, Smartphone  Filmmaking and Special Drama-Film School Online and Setman, The Sword of Excellence Dunamis Ministry Int’l Inc.,THE SEDMI, Evangelist Paul-Esupofo Oriade is calling on drama ministers across the globe to go higher in their personal relationship with God especially at this time when there are lots of confusions around. 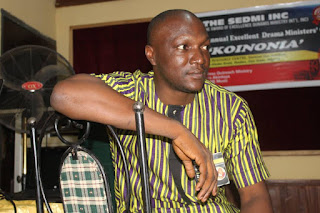 He made this statement at the just concluded 20th Anniversary of  the SEDMI held on Saturday, 16th of June, 2018 at Ibadan, Oyo state capital.

Gospel Film News correspondent who was at the scene disclosed that the theme of the anniversary/conference is ‘Koinonia’ which is interpreted communion with God.

Oriade noted that the starting point for anyone called into ministry is Jesus Christ that whosoever is in ministry must first give his or her life to Jesus Christ, saying after that such person should develop a personal relationship with God and get focus on the calling to avoid distractions.

“Avoid distractions heavily please, avoid distraction on every side. Whatever capacity you have or tool you have now use it to the glory of God and grow into it to a bigger thing that God will place in your hands. I will not deceive you, even this team that are purposefully working about, travelling around to cover events, covering things with their data on internet I want to encourage you to please keep it up. Consistency is very important,” he said.

He also noted that many people have started this kind of work; many of them are not in the system today, adding that not because they don’t want to be in the system but challenges and situations.

“My final word is that please I’m imploring you, carry the kingdom to every nooks and crannies. Don’t do segregation, don’t sectionalize yourself but make sure the message you will give out cut across everybody and situation around you,” he concluded.

It would be recall that the anniversary was loaded with training like ‘21st century film making’ by Oladipo Fresh, a forum on ‘How to make a short film like ADs (Advertisement),’ ‘Creative Editing on Smartphone; Younger Filmmakers approach’ by Olufemi Abraham, ‘Eulogy ministration’ by Ajipolowojesu, powerful music ministration by Akinwole Akintoye and among others.

Our news men reported that during the forum tagged ‘How to make a short film like AD’, the conclusion reached by the panelist was that any short film which will be as short as an advert and will still pass across message must have solid preparation, objective, correct planning of message, go straight to the point, pay attention to details and director should endeavour to be with the editor during post production.

The panelists include professionals in the film industry like Sele Aneni, Beckley Christianah, Taofik Akinwunmi and anchored by Paul-Esupofo Oriade.

3 Comments on “Paul-Esupofo charged Drama Ministers to strengthen relationship with God as THE SEDMI Inc. clocks 20”