The national drama department of The Redeemed Christian Church Of God is celebrating 10years of God’s faithfulness. 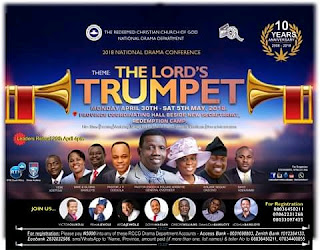 This will happen during the 2018 national drama conference which will hold at the province Coordination Hall, beside new Secretariat, Redemption Camp starting from monday 30th day of April to Saturday 5th of May 2018.

The 2018 National Drama Conference is dedicated to the celebration of the Anniversary with the Theme “THE LORD’S TRUMPET”.

It sould be noted that the General Overseer Of The Redeemed Christian Church of God, Pastor E.A Adeboye and his Wife will be the chief host and will also be ministering.