A timely and sort-after movie titled ‘miracle of mercy’ is set to be released for sale next week after several premiere at different locations across the nation. 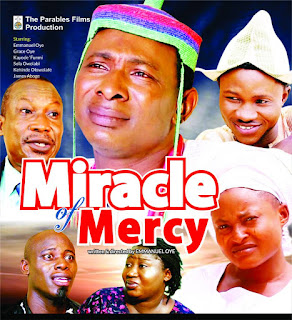 The movie produced and directed by Emmanuel Oye will be finally out for sale by May, 2018.

In an exclusive interview with Gospel Film News, Oye revealed that ‘Miracle of Mercy’ is an outstanding movie that depict the benevolence of God on erring sinners in this present world, to save and deliver them from  decadence.

He noted that the movie also revealed the two sides of Mercy.

The producer however disclosed that the movie will be released for consumption of the general public soon due to popular demand, the positive impact on lives and conversion  of myriad souls after several broadcast on television, adding that the premiere is still ongoing in churches and Christian gatherings on  request.

More so, Salvation, Repentance And Deliverance is the core message of the film and it will prepare people for the coming of Christ and from the corruption of this present world.

“The movie when released next week will be available for sale at Bible  Wonderland offices across the nation, especially in Agege, Iyana ipaja, Ketu and Surulere. It will  also be available at New Dimension office at idumota, Lagos. It can also be accessed on YouTube  following this links,” he stated.