The Gospel Music Drama Ministry, Also Known As ‘Aramoda’ will be holding a music concert alongside Album launch next month. 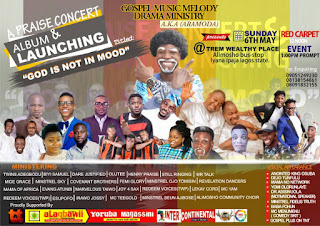 Gospel Film News gathered that the concert/album  entitled ‘God is not in mood’ is slated to be launched on 6th of May, 2018 at TREM Wealthy Place, Alimosho bustop Iyana Ipaja, Lagos.

According to the organizers, the concert will shake Alimosho and its environs, saying the concert will start with red carpet by 12 noon and main event to start by 1:00pm with lined up of music ministers, comedians and drama ministers.

It was gathered that the likes of Adegbodu twins, Biyi Samuel, Dare Justified, Olutee, Henry Praise, Still Ringing, Mr. Talk will be performing live at the event.