Preparations have been on top gear to ensure that the All Nigeria Conference of Evangelical Drama Ministers, ANCEDRAM national Congress hold at Adamawa.

The congress which was bid to hold at Yola in Adamawa state will commence on thursday 5th to Sunday 8th of April, 2018. 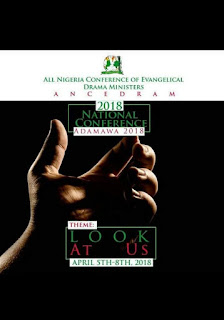 This year congress seem to have a unique theme which is ‘look at us’.